Squeaker: Whats it about?

Squeaker is a film about a boy who is bullied for supposedly being gay when he actually has always felt he is - and wants to become - a girl. He meets a damaged ex-boxer pigeon fancier with whom he forms an unlikely relationship - both ultimately finding some degree of salvation and redemption.

A sort of transgendered Kes. Please donate here. Thanks folks!

Who wants to help me win a BAFTA?

I want to make another short film. A non time limited competition one this time. One that I can aim at BAFTA and Oscar feeder festivals. Since all of my funding from the last one came from people I knew I'd rather not take the crowd funding route and keep the 15% they take in fees.

Squeaker is a short film about a boy who is bullied for supposedly being gay when he actually has always felt he is - and wants to become - a girl. He meets an ex-boxer pigeon fancier with whom he forms an unlikely relationship - both ultimately finding some degree of salvation and redemption.

I'd be grateful if you could DM or email me if you would like to pledge an amount towards this. If you want to just sponsor me up front then thats very welcome too. In return you'll get a credit at a level commensurate with your contribution plus as far as practicable invites to screenings, bonus features, perks, my undying affection.

You'll also get the warm glow (hopefully) of helping me take the last logical step before a full feature production.
Who wants to help? Donate now! Watch previous films here.


I went to the open evening at the new Birmingham Film Studios last night. It was a good night and I was very pleased with the turn out. Some old friends and some new. I had a chat with several people that might lead to new collaborations. I love networking - you just never know unless you "work the  room" and find out who people are and what they aspire to do - what projects you might be able to create together. Its absolutely invaluable in my experience.
The new green screen at BFS is fab. They're doing a knockout deal at the moment where they'll include the use of a 4k Red camera for free when you hire the green screen for a day. The cameras come with EF or PL mount so you can use your own Canon lenses but on a RED!

I'm going to be sharing a small office at BFS with James Fair who runs a 72 hour feature filmmaking project called appropriately enough The 72 Project. He is looking for all sorts of people that might want to get involved in helping shoot the latest edition of the project right here in Birmingham. He's already done other projects in Melbourne and Galway.
You can join the mailing list at the bottom of the project page if you want to get involved and keep up to date with whats happening.

James teaches film at both Staffordshire University and Filmbase in Dublin. I'm hoping that my own Stickleback Productions and James's Grand Independent will be able to collaborate together in the long term on a range of fiction, documentary and educational projects.

In other news I've been very pleased to learn that the 104 Films' Generator scheme for which I was selected earlier this year is continuing with some additional training and mentoring in Sheffield. Yippee! I had a great time at the Edinburgh Film Festival with my fellow Generation 104'ers so am delighted to be meeting up with them all again.

TAFN
Posted by Brendan O'Neill at 14:43 No comments:

Looking for Excellent Short Scripts with a 35-40 Female Lead

I'm looking for a completed short, powerful script with a strong female lead aged 35-40 years old. 10-15 minutes maximum length. Its a low-no budget production so few locations and that means effectively nothing period, horror or Sci-Fi. I'm looking for something that could be submitted to top indie film festivals such as Sundance.

The chosen script will be shot on Pannyhire's new Red Epic-X with high production values.

Please send a short synopsis, 1 x script and a paragraph about yourself in first instance. Please do not send me back catalogue that has already been rejected by others. Email below.

Posted by Brendan O'Neill at 12:30 No comments:

What can I say? Edinburgh International Film Festival was simply brilliant! Big thanks to the fantastic folks at 104 Films who selected me for their Generator scheme and which I'm very pleased to say is ongoing. My fellow Generator scheme participants were a great and multi-talented bunch too.

I'm going to do a full write up soon but was barely back in Brum when I received an invitation to pitch in front of another industry panel at Cofilmic in London so am now preparing for that! In between I also managed to squeeze in hosting a Q and A at the Lighthouse in Wolverhampton last night with the makers and actors from Dalston Heath - a short that should do very well on the festival circuit.
Their were plenty of highlights at the festival for me but the best one was meeting the lovely and brilliant actress Kate Dickie (Red Road, Prometheus) on the first day. Kate likes the project I pitched to her earlier so it was great to meet and chat about possibilities.

The Making of Fled

Here is a short Behind the Scenes video which was shot on Day 1 at the St Paul's Church location in central Birmingham. Thanks to Ed Stone for shooting and editing. Its nice to have a memento of the behind the camera activity.


Behind the Scenes of 'FLED' from Edward stone on Vimeo.

Posted by Brendan O'Neill at 17:37 No comments:

The "Spielberg of Hereford" signs up as Director of Photography

Great news! Neil Oseman once described by The Guardian as "the Spielberg of Hereford" signs up as Director of Photography on my Sci-Fi project.

The crowdfunding campaign has less than a week to go. Please select a perk and donate by following this link.

My Indiegogo crowdfunding campaign for the Sci-Fi film is now live. Please select a perk and donate by following this link. 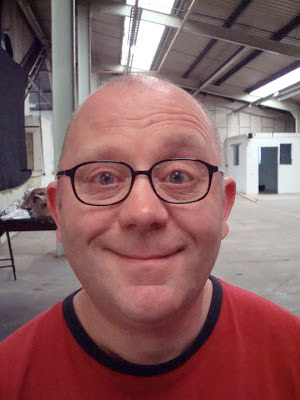 Posted by Brendan O'Neill at 16:42 No comments:

I'm now in pre-production to have another go at the London Sci-Fi Society 48hour filmmaking competition over the weekend of 6th and 7th of April 2013. I'll be directing this time and no doubt producing a lot as well but already have the makings of a good team. Guillermo Del Toro is on the jury so I'm going to have to pull a really big rabbit out of the hat to try and win this one. The Facebook group for the project is here if you wish to take part.
Fortunately some of the people who helped me with our World War 2 themed film Around Again are keen to have another go. We managed to get tremendous buy-in and Esprit d' Corps on that project -  the second time I have put together 50 strong cast and crews to help make nano budget, high production value films - so I'm hoping for more of the same.
I'm very pleased that talented crew like sound man Sirajuddin 'Sam' Cousins, cameraman Richard Twilton, pyrotechnics maestro Matt Harley as well as my good friend and co-writer Dominic Carver have signed up for more 48hr madness.

I'm also hopeful that I can work again with Roger Harding - the scary interrogator in Internalised our 2011 competition entry. Internalised recently made Film of the Day on Brett Gerry's blog.

I'm also very pleased that Isla Eleri Ure who won Best Actor for her own film Passengers at the 2012 Underwire Festival has also agreed to join the team.

I'm hoping to warm up for the Sci-Fi competition by doing another 48hr competition which takes place at the beginning of March as part of the Stoke Your Fires festival.

Serendipitously I've been asked to be on a Staffordshire University sponsored panel at Stoke Your Fires to talk about film in the region. I was put forward by Tim Beasley who runs a great locations agency called UKFilmLocation.com. I'm very pleased to be invited on to my first film festival panel especially as my friend and mentor Professor Roger Shannon is on the same panel.

Incidentally Roger is presenting the Egyptian film El Shooq (Lust) as part of his Departure Lounge series at the Midlands Arts Centre on 23rd of February. It was selected as the Egyptian entry for the Best Foreign Language Film at the 84th Academy Awards and was directed by our mutual friend - the Pharaoh of Film Khaled El Hagar. Please note that this event is invitation only.

Last but not least I'd like to thank all the people who have donated towards my next production.  I couldn't do it without them so will credit their names with pride. If you haven't donated then you still can via this link to my Indiegogo Crowdfunding camapign.

Thats all for now folks!

Posted by Brendan O'Neill at 01:15 No comments: